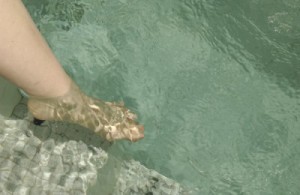 Who is a Jew is a contentious issue in Israel and other parts of the Jewish world. The question has been raised and discussed in the Israeli Knesset and by rabbis around the world.

The answer is actually very simple, one who is born a Jew or one who converts to Judaism.

The complications start when the question is asked about the conversion process and what defines a baby at birth?

Since we don’t really know 100 percent how Jewish lineage was passed on in ancient times, we can only come up with various possibilities. There are two – matrilineal or patrilineal descent. Matrilineal descent means that if a mother is Jewish her sons and her daughters are Jewish even if her husband (the father of the children) is not Jewish himself. Patrilineal descent means that if a Jewish man fathers a child, even if the mother is not Jewish, then the child is Jewish. A person may convert to Judaism and take on the commitment of being a Jew. This practice is accepted by all communities (except one) and according to Jewish law, a convert is considered an equal to a Jew that was born Jewish. The question of “who is a Jew” when it comes to converts is not really who is converted and becomes a Jew but really: “who is a rabbi.” There is a deep division between the different branches of Judaism on who is qualified to perform a conversion and this is the center of the controversy.

Matrilineal versus patrilineal, which one is the correct lineage?
Let’s start with today. Judaism, like other religions, has different denominations. Each one has a different approach to the question.

Orthodox Judaism, which is comprised of Ashekenazi and Sephardi communities and also includes sub groups such as Chassidic (Hasidic), Modern Orthodox, Litvish Communities to name a few, only accepts matrilineal descent. The belief is that the Torah (Five books of Moses) proscribed a way of life with laws that are discussed in the Talmud. These laws are believed to be divine and not open to change. The source according to Orthodox Judaism is a from Deuteronomy 7:1-4 and in Leviticus 24:10. The passage from Deuteronomy 7:1-4:

7:1 When the Lord thy God shall bring thee into the land whither thou goest to possess it, and shall cast out many nations before thee, the Hittite, and the Girgashite, and the Amorite, and the Canaanite, and the Perizzite, and the Hivite, and the Jebusite, seven nations greater and mightier than thou;

7:2 and when the Lord thy God shall deliver them up before thee, and thou shalt smite them; then thou shalt utterly destroy them; thou shalt make no covenant with them, nor show mercy unto them;

7:3 neither shalt thou make marriages with them: thy daughter thou shalt not give unto his son, nor his daughter shalt thou take unto thy son.

7:4 For he will turn away thy son from following Me, that they may serve other gods; so will the anger of the Lord be kindled against you, and He will destroy thee quickly.

7:5 But thus shall ye deal with them: ye shall break down their altars, and dash in pieces their pillars, and hew down their Asherim, and burn their graven images with fire.

There is a Mishna in the tractate of Kiddushin (66B) which states that if a child’s mother is not Jewish then the child is not Jewish. Biblical laws are codified in books and this law appears in: The Code of Jewish Law Even HaEzer 8:5 and in Maimonides’ Mishneh Torah (Laws of Forbidden Relationships, 15:4). Maimonides (Rambam) wrote: This is the general rule: The status of an offspring from a gentile man or from a gentile woman is the same as his mother’s, we disregard the father.”

10:2 And Shecaniah the son of Jehiel, one of the sons of Elam, answered and said unto Ezra: ‘We have broken faith with our God, and have married foreign women of the peoples of the land; yet now there is hope for Israel concerning this thing.

10:3 Now therefore let us make a covenant with our God to put away all the wives, and such as are born of them, according to the counsel of the Lord, and of those that tremble at the commandment of our God; and let it be done according to the law.

And again in Ezra 10:10 And Ezra the priest stood up, and said unto them: ‘Ye have broken faith, and have married foreign women, to increase the guilt of Israel.

10:11 Now therefore make confession unto the Lord, the God of your fathers, and do His pleasure; and separate yourselves from the peoples of the land, and from the foreign women.’

10:12 Then all the congregation answered and said with a loud voice: ‘As thou hast said, so it is for us to do.

Orthodox Judaism does not believe that the system of passing Judaism on to children was always matrilineal. The Orthodox belief is that prior to the receiving of the Torah, patrilineal descent was accepted. After the Torah was received at Mount Sinai, a new legal system was introduced that proscribed matrilineal descent. Orthodox Judaism holds that although the child’s religion at birth is determined by the status of the mother, the status of the child vis a vis tribe is a function of the father. Assuming a child is born to a Jewish mother and Jewish father the child will be either a Cohen (priest), Levy (Levite) or Yisrael (Israel).

The Reform movement has taken steps to change their approach to the question and in 1983 the Central Conference of American Rabbis (CCAR) adopted “The Status of Children of Mixed Marriages” resolution. It declared that children born of a mixed marriage are under the “presumption of Jewish descent” and the presumption is to be established :through appropriate and timely public and formal acts of identification with the Jewish faith and people”.

Resolution Adopted by the CCAR

The Status of Children of Mixed Marriages

The Central Conference of American Rabbis declares that the child of one Jewish parent is under the presumption of Jewish descent. This presumption of the Jewish status of the offspring of any mixed marriage is to be established through appropriate and timely public and formal acts of identification with the Jewish faith and people. The performance of these mitzvot serves to commit those who participate in them, both parent and child, to Jewish life.

Depending on circumstances,1 mitzvot leading toward a positive and exclusive Jewish identity will include entry into the covenant, acquisition of a Hebrew name, Torah study, Bar/Bat Mitzvah, and Kabbalat Torah (Confirmation).2 For those beyond childhood claiming Jewish identity, other public acts or declarations may be added or substituted after consultation with their rabbi.

The resolution created a larger rift between the Orthodox movement and the Reform and the reverberations are still being felt. The rift is not new and Reform conversions are not accepted by Orthodox rabbis although some are accepted by Conservative rabbis.

There is also a belief that the system of patrilineal descent was used until the Roman invasion of Israel. At that time Jewish women were raped by Roman soldiers and the offspring, raised in Jewish homes could have been considered as non-Jews. By changing to a system of matrilineal descent they were sure who the mother was and eliminate any question about the child’s lineage.